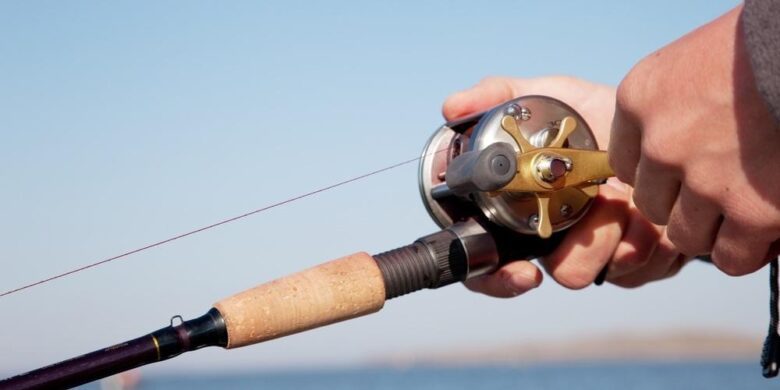 Matching your tackle to suit them is crucial. A lightweight spinning setup may be fine for smaller channel cats but if you are in search of monster blue or flatheads then you’ll have to have a rod with more power.

So which setup is best?

A baitcasting rod and reel is a must for larger cats

​Catfish can grow to some pretty monstrous sizes in the right water and with enough food available to them.

The best catfish rod and reel combo need to have enough backbone in the rod to handle these giants and a solid drag rating and internal gears in the reel to help haul them up from the depths.

A smaller spinning outfit will not be up to the job of hooking, fighting, and landing a larger catfish.

I would always recommend that you spend a little more on the reel than on the rod. A high-quality reel is a much better long-term investment than an expensive rod.

​When choosing a catfish combo you should really decide your budget first and then you can make a decision on whether or not you can afford to buy a separate rod and reel rather than a pre-packaged combo.

You can choose the best baitcaster combo under 200 from a variety of the top brands and most of them will tend to give you a fairly decent catfish ​combo.

But if you need something for some of the larger-sized catfish then it might be best to make your rod and reel choices separately instead of in a combo.

​The most important thing to consider when deciding on a catfishing combo is that you have a rod with the correct action, length, power, and the material that it is made.

The reel should also be the correct size for your rod and line. And, it should be capable of handling a large catfish.

​As mentioned above you can’t just choose any old rod, knowing what each of the different attributes of a rod means is important:

​The action of a rod will generally describe how the bend in the rod is formed and how fast the rod blank will spring at the top.

A slow-action rod will start to bend much lower down the rod blank near the reel seat. These types of rods are generally used for casting very long distances. That distance however is at the expense of sensitivity.

You get a slower hook set and will generally miss more strikes. A moderate action rod will start to bend higher up towards the middle of the rod.

A fast action rod will bend much higher up the rod blank, usually in the top one-third. A fast-action gives the best sensitivity and feedback through the rod.

But, it does this usually at the expense of casting distance

When choosing a good ​​pole the length is actually quite important.

Unlike on a good musky rod and reel combo the preferred choice of materials for a catfish ​pole is e-glass.

​Graphite rods might be fine for a bass spinning rod but for catfish, they are just too brittle. Graphite does not respond well to being under a large strain for an extended length of time.

E-glass however can take a real beating. It’s not a sensitive as graphite and is usually a little on the heavy side.

​The best catfish reels are usually baitcasters. As we mentioned above a spinning reel and rod is fine for smaller catfishing but once you hit the heavier fish a baitcaster or casting reel is the one to go for.

Some folks do use some of the more modern low-profile casting reels but the majority of catfish anglers will still use the more traditional round style baitcasters.

The round-style reels are much easier to hold in the hand as you reel in. They may not be quite as effective at achieving long casting distances but they are definitely better at and more comfortable to fight a large catfish on.

​Low-profile reels will also have a smaller line capacity, and when you are using a heavier line you really do need a spool that can handle a lot of thick lines.

Abu Garica and Shimano male some pretty solid round baitcasters and you really can’t go wrong with either brand.

Make sure that you pair your reel with the correct line as per the reels ratings. Most people will use 20 lb mono as a minimum when catfish fishing.

A high-quality drag system is also extremely important. With a good drag, you can handle really large fish on only 20 or 30-pound line. The higher quality drags will have less tendency to heat up and seize under a heavy load.