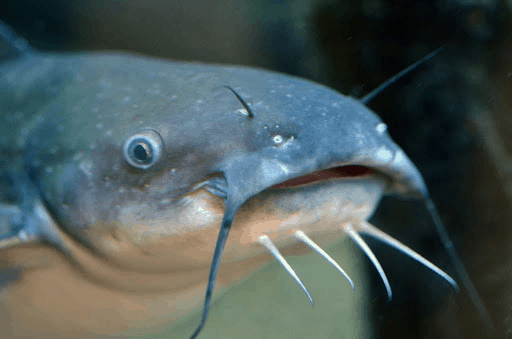 Catfish are named for the barbels that resemble the whiskers of a cat. They can have up to four pairs of barbels and the barbels do always come in pairs.

They also have chemoreceptors across their faces, which allow them to taste and smell anything they touch. They do not have scales.

In fact, catfish have mucus-covered skin that they use in cutaneous respiration. They do have protection in terms of dermal plates of bony plates called scutes.

​Do Catfish Have Scales?

​Catfish don’t have scales, instead, they have ​leathery skin.

Most fish have scales for protection from predators, parasites, and injuries. Scales also reduce water resistance when fish are swimming.

Catfish evolved differently and they don’t have scales. However, they do have bony plates for protection.

In addition, they breathe through their skin and scales would get in the way of this process.

Catfish grow to be quite large and they have big mouths. They have a keen sense of taste and smell. They can hide in the mud or under other objects on the floor of their habitat. They have other means of protecting themselves for survival purposes.

One interesting fact about catfish is that the entire body is covered with taste buds that can detect chemicals in the water. They can also respond when something touches them. Their skin is covered in mucus and they can breathe through it.

Some catfish produce poison in the glands of their skin that cover the dorsal fin. They can use this defense mechanism when they are in danger. This is an added protection that perhaps played a role in the fact that they never developed scales.

There are three different kinds of catfish that are commonly fished for.

Compared to other freshwater fish catfish gear is considerably heavier.

A good catfish combo would consist of a high-quality catfish reel and a catfish pole that is rated for a heavy catfish fishing line or roughly 20 to 50 lbs.

Do You Need to Skin Catfish?

Even though catfish have no scales, they do have a mucus coating over their slippery skin so you do need to skin them. Their skin is tough and leathery so it is difficult to eat. You should skin them before you prepare and eat them.

Catfish come in a range of colors, depending on what kind they are. They are usually darkly colored so that it is easy for them to camouflage in the murky waters where they like to spend time during the heat of the day.

Channel catfish are blue to olive on the back with white bellies and silvery sides that are covered in black spots. Blue catfish are normally blue and flathead catfish are brown or yellowish, which is why some people call them yellow cats.

The eight whiskers, called barbels, are the distinguishing characteristic that makes catfish easily identifiable. They also have a broad, flat head and small eyes. The caudal fin, which is the tail fin, is forked.

They have three sharp spines. One is in their dorsal fin and one is in each of the pectoral fins. These spines have venomous mucus glands that secrete poison. The poison is painful but it is not dangerous.

The flathead catfish has a protruding lower lip that helps to distinguish it from other types of catfish. The unique look of the catfish makes it one of the easier types of fish to recognize.

Catfish have a few natural predators, which include humans, bears, birds, and larger catfish. They can grow quite large and they are voracious feeders. They start off as bottom feeders but once they are larger, they hunt prey.

You will find them feeding in all parts of the water. They are scavengers and they eat anything that they think will taste good.

Catfish aren’t nocturnal or diurnal. They feed any time. They prefer to rest on the bottom of their habitat during the heat of the day but they are found at the surface feeding at night.

They can withstand a wide range of temperatures so they do not need to hibernate. However, they usually find a spot to settle in over the winter. You will find them near rocky areas or by a fallen log. They stay anywhere that they feel safe.