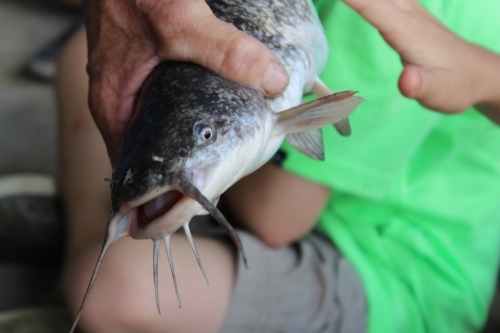 Catfish will strike at any moment of day or night, but many anglers are fascinated about how they respond to weather changes, particularly rain. Rain impacts, among other factors, water temperature, water turbidity, air temperature, water clarity, available light, and nutrient disturbance. As a result, it appears that only natural rain will affect catfish fishing.

The availability of food has an impact on catfish as well. A school of shad, a clam bed, and bluegills are all good food sources for large catfish. Much of what these fish do on a day-to-day basis is dictated by the presence or absence of food. Catfish behavior and feeding could also be affected by moon phases and rain.

Despite the fact that many catfish are energetic at night, they don’t seem to enjoy a full moon. It’s worth noting that they want the darkest night imaginable. Based on the season, rain could cool or warm the water, which usually prompts a feeding reaction.

Do Catfish Bite in the Rain?

Is it Possible to Fish Catfish Before It Rains?

Catfish, like some other types of fish, will feed before a rainfall. Fish are sensitive to the changes in atmospheric pressure, and as a storm pattern approaches, the difference in pressure will cause catfish to emerge and feed.

Catfish will feed prior to, during, and after a rain; however, food sources such as bluegills and shad become extremely active prior to rain.

Employ bluegills, shad, clam meat, or shiners as bait to capture catfish before the rain arrives. Nightcrawlers and worms will be of help to fish channel catfish of a small size. Worms are unimportant to big blue and flathead catfish.

Use bluegill or live shad to rig a fish for huge flatheads. Because their mouthparts are smaller, trophy blue catfish and channel catfish seem to favor shad or bluegills chopped in half.

Is it Possible to Fish Catfish During Rain?

As the rain begins to fall, catfish will emerge from their deep summer or winter caves, looking for food. Based on the season, rain provides cooling or warming of the water temperatures and air.

Rain frequently implies transient rises in water temps during the winter. Many types of fish, including catfish, respond to the increase in water temperature by activating both predatory and prey reflexes.

Rain makes it hard for prey like bluegills, shiners, and shad to locate and identify approaching attackers due to overhead noise from the rain reaching the surface, water temperature fluctuations, and diminished light visibility.

Catfish, with their capacity to locate food in extremely low light, are more adapted to these low-light situations than the food they eat. That offers catfish a strategic advantage over some of their preferred foods, motivating them to get out there and eat.

Is it Possible to Fish Catfish After It Rains?

The full impact of the warming or cooling water will be evident once the rains have ceased. Rains change the temperature of the water, which encourages most species, including catfish, to eat.

Food and nutrients will have been washed into the water by the rain. Catfish will not generally eat rain-washed food, although they will eat food they prefer. Minnows, clams, shad, shiners, and bluegills all benefit from the rain’s rush of nutrients and food. Eating baitfish exposes them to assault, which is why catfish like this time of year.

Heavy rains could also stir up minerals and debris, muddying the water, reducing vision, and rising levels of water. All of these conditions make it perfect for catfish, which do not rely on sight to hunt and consume vision-dependent fish like bluegills and shad.

Are Floodings and Rain Harmful to Catfish?

Flooding and rain have an impact on catfish behavior and feeding. Rain has the ability to both cool and warm water temperatures. A downpour, for example, will boost the temperatures of water in the winter when catfish prefer warmer water.

Catfish will frequently migrate near the mouths of rivers and streams, where warm water will be the first to enter a lake. Similarly, during the summer heat, an unexpected rainstorm decreases not only the air temperature during the day but also the temperature of the water.

Flooding and rain carry food and nutrients to the water from the land. During instances of river flooding, catfish will migrate to calmer areas of the stream, away from debris and strong currents.

They will frequently situate themselves in calm water facing a string current to allow dead bait to be given to them. Catfish will not want to stay in the fast-moving water for long. Flooding in lakes often creates new hunting grounds and places where catfish can surprise creatures.