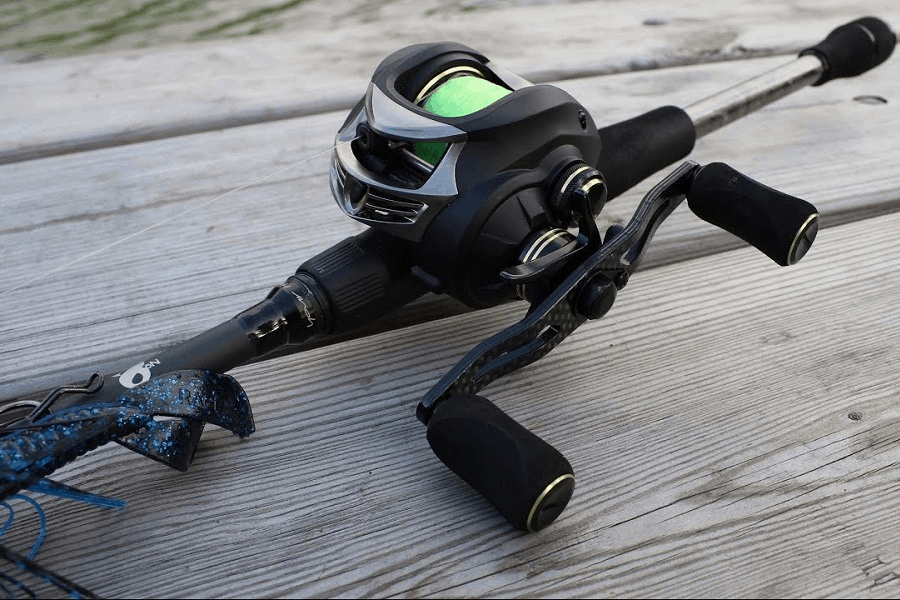 For those who want to take their casting to the next level, you may find that the KastKing’s Stealth Baitcasting reel has the ability to truly wow you.

In this review, we are going to talk a little more about the features of the KastKing Stealth Baitcasting Reel, but we are also going to give you an overview of what people who have purchased the fishing reel had to say about their overall experience with it.

Then, we’re going to give you our recommendation on whether or not this reel is something you should consider purchasing for your own fishing pole!

KastKing are producing some of the best baitcaster rod and reels for the money and are slowly but surely eating into the market share of more established brands.

The KastKing Stealth reel is a high-performance carbon baitcasting reel that is incredibly lightweight (it only weighs 6 ounces!) and it gives anglers an incredible experience.

Notable features of the KastKing Stealth Baitcasting Reel include:

The carbon baitcaster is so lightweight because the designers created this beautiful piece from aerospace-grade aluminum micro-mesh gear.

This system is going to give you a versatile high-speed gear ratio of 7.0:1, which can make a world of difference when you’re trying to reel in the big catch of the day.

The reel has a spool capacity of 165 yards of 12-pound test line that is finished in a black matte carbon black and has golden highlights. The Stealth reel is 100% resistant to corrosion and they are a great option for anglers who enjoy saltwater fishing.

Anglers will appreciate being able to cast further distances with this reel because the line just seems to fly out of the reel with ease. This ease comes from the 11 anti-corrosion shielded ball bearing system.

This one-way clutch system is able to give you super quick hook sets each and every time, but it also delivers a smooth performance that tournament anglers and casual angler can both appreciate.

When we looked at the user reviews, we saw that most had great things to say about the KastKing Stealth Baitcasting Reel and left amazing reviews.

Of these reviews, people commented on how lightweight and fast it was. Several people thought that they would lose casting distance with this particular unit, but they were pleasantly surprised by the fact that it was able to outcast their old spinning reels.

Many anglers who purchased this reel felt like they are able to cast further and reel it in much smoother than with previous reels that they have tried. One customer even said that it is a “Cadillac” of reels.

Folks who fish in saltwater the majority of the time really appreciate the fact that the reel is anti-corrosive, so they can use the reel and trust that the integrity won’t be compromised due to the salt air.

The most common complaint customers had was that the reel became rusted, even though it claims to be anti-corrosive and able to be used in saltwater.

Customers expressed their displeasure over the instructions that came with their reel, as it was in Chinese and there weren’t any English instructions.

Customers said that the weight and the knobs were perfect, but they ended up wasting so much line because it would birdnest badly with the “brakes at max and the tension knob” was as tight as it would go.

One customer said because of how badly the reel birdsnest, they had to re-spool the reel after each time they would use it.

Experienced anglers who have purchased this reel were disappointed because they had to continuously pick out backlash. They would set the magnetic brake tighter, but this fix stopped working after a few casts.

This is going to be the perfect reel for those who enjoy a variety of fishing styles, be it flipping, pitching, punching, or using Alabama rigs. With this reel, you’ll be able to cast much further than before because the line is going to fly!

When you pair the 16.5 drag system with the 4 carbon disks and the hardened aluminum washers, you’re going to have incredible drag power.